I’ve been increasingly interested in longevity for the past few years but not written much about it. A part of the reason is that I’ve tried to keep my finances out of this blog, and part of my interest in longevity is in investing. I want to talk about that in a future post. This post is about a curated selection of longevity-focused books that I’ve read.
Longevity research has been slowly but steadily accelerating since the 90’s. There has been increasing progress since the late 19th century, but until recently it has been ‘career suicide’ to dedicate one’s research to this domain.
This post has two purposes for being: I would like to capture and share my thoughts on some of the longevity books that I’ve read. Eventually, I would also like to provide a useful guide for anyone looking to start exploring longevity biotech by reading a casual non-fiction book. There are a lot of books labeled as longevity books that are really just lifestyle, diet, fitness, cosmetics, and supplement books. Those topics are tangentially related to longevity, but are not the most interesting and impactful longevity space is primarily concerned with. The authors of these books are often not even aware of the high likelihood that maximum human lifespan and healthspan will increase by significant amounts in this century. To compound the issue, some of the authors are celebrities that are about ’embracing aging’, such as Cameron Diaz’s book, and their fame means that if you search for ‘longevity book’ on Amazon you will first see one of these books.
I’ve selected four important books for longevity that are targeted to the general audience and each provide a different value. I will do mini-reviews of them here, focusing on their differential value add. The books I’m considering here are written by world class researchers that break down the research trends and explain the cellular mechanisms that will enable such a future that will slow, stop, and eventually reverse aging. In case you are new to this idea, if it sounds suspicious, perhaps because of the history of dubious claims in supplements and alternative medicine, some appeals to authority may be useful to keep you from closing the tab. The people doing the important research here include PhDs and professors at universities such as Harvard and Stanford, and publish the research in the top journals such as Nature and Cell. Institutional capital, from funds and venture capital, is backing a growing number of these companies, which requires significant diligence to vet the ideas. There are also publicly traded companies in the space, as well as highly visible private ventures such as Alphabet’s Calico and Altos Labs recent $270M round announcement, backed Jeff Bezos. 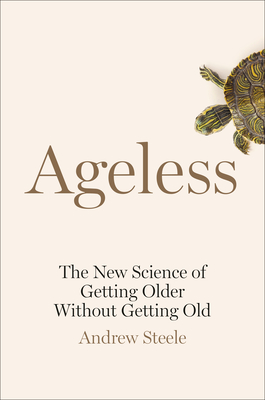 Ageless: The new science of getting older without getting old – Andrew Steele (2021)
Unlike Sinclair and Barzilai, Andrew Steele hasn’t launched many LongBio companies (or been in licensing disputes regarding products). His background is in physics. This disconnectedness actually appears to give Steele an edge in being able to provided less biased surveys of the different approaches and research. Steele does not cover every advancement and research area (e.g. fisetin is not even mentioned in the senolytics section), but Steele also manages to keep a balance between the history of research, technical discussions, and big picture trends, which makes this book very appropriate for a first foray into longevity books. 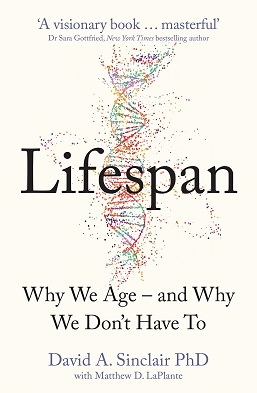 Lifespan: Why we age – and why we don’t have to – David Sinclair (2019)
This book is written with enthusiasm that is infectious at times. David Sinclair is a very high profile person in this space, having an extensive research career and having developed several businesses that have made money. While there are supporters, there are also those that express doubt on reddit that feel that his enthusiasm is a charade. I can’t comment on whether or not the book is genuine (which is not falsifiable), but I did felt that the book was well written and presents a cohesive story that benefits from Sinclair’s solid research and business background and conviction. This is certainly a field that deserves passion. Sinclair presents describes aging in terms of information theoretic entropy and accumulation of DNA damage and epigenetic noise, suggesting a focus on these DNA and cell-based mechanisms of aging, with less focus on others such as atherosclerosis. The content is naturally biased towards Sinclair’s interests describing his personal story with NAD+ and resverterol (with a little discussion of the GSK/Sirtris shutdown). It was a pleasant surprise to see the depth into which Sinclair discusses the sociological consequences of extending lifespan, beyond the typical strawman arguments. These societal questions are something that Steele and Barzilai only address at the surface level, which is acceptable, since they are not sociologists. But for the layperson reading into this field for the first time, these questions can be the gatekeepers, and it is important for a public advocate to be able to speak to them. The weakest part of the book is also the bias towards his own research, especially in the anecdotal descriptions of his and his father’s self-treatments using NMN, metformin and resveratrol, as well as to some extent the neurogenesis glaucoma work. The near miraculous effects in his father (from being near bed-ridden to being super healthy and active) are so outsized from the expected outcomes in the literature, that even with the preface that this is just n=1, this will encourage a general audience to self-experiment with similarly outsized expectations. I much rather preferred Steele’s approach, which was to say the only verified approaches are exercise and diet for now and that we just need to wait for better studies and drugs. Overall, because of Sinclair’s influence on the field and conviction, I think this book is a must-read (but should be supplemented with other perspectives). 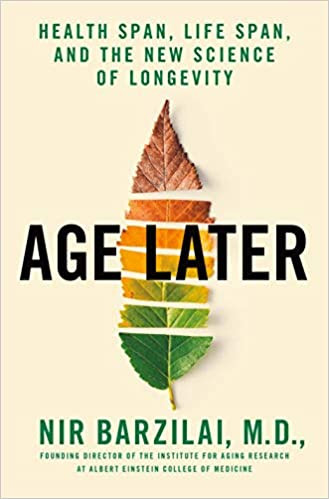 Age Later: Health Span, Life Span, and the New Science of Longevity – Nir Barzilai (2020)
This book follows Nir Barzilai’s research and looks at centenarians in depth to see what patterns emerge. The data is naturally observational and confounded, so the trick is to come up with a theoretical causal model, and then test it in a more controlled experiment. Barzilai has access to gene banks that make this study more interesting. Barzilai talks about business and investing to a larger degree than any of the other books, including business development, fundraising, and valuations, which was refreshing to see. Barzilai also talks about metformin in considerable detail, including how he managed to design, advocate for, and launch the Targeting Aging with Metformin (TAME) trial, including getting the National Institute of Aging (NIA) to sign on. It might be natural to focus on research progress, but in practice, these interpersonal, business, and salesman ship skills are incredibly important in this field, so it is wonderful to see this book cover that in such detail. As suggested by the centenarian premise, this book does not try to look at each root cause of aging, but instead looks at individual solutions that are interesting to the author. As a result, it has coverage of different research topics when compared to the other three books (for example, a significant section on statins). As a result, I would recommend this book as a supplement to the others. 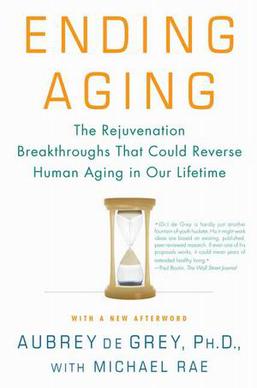 Ending Aging – Aubrey de Grey (2007)
This is a groundbreaking book that paved the way for others to follow and helped to form a movement and community/organizations (SENS). The book describes in detail seven root causes of aging and proposes theoretical solutions for each of them. Because of AdG’s background and previous book, he spends more time on the mitochondrial mechanisms. This book was written for a general audience, but it does go into enough detail that the technical sections are slower to read. This detail is refreshing at times but some of the detail will likely be lost on someone like me (e.g. little biology background) unless I go back and forth between the pages several times. The other thing is that this book does feel a little dated – it won’t contain the latest advancements, and some of the optimistic predictions of progress (which were contingent on proper funding) have already expired without being fulfilled. For these reason I would recommend the Steele or Sinclair book as a first book before approaching this one.

There are of course, many more interesting books to read. I also read Al Chalabi and Jim Mellon’s Juvenescence and Jean Hebert’s Repalcing Aging and found them more specific than the above books. Juvenescence‘s subtitle is ‘investing in the age of longevity’, but there is not that much content about actual investment and business (other than a compilation of a list of companies), which was surprising to me given Jim Mellon’s background. Rather, it spends most of the time on surveying the research progress, as well as a mixture of health advice – this part aligns closely with David Sinclair’s book, perhaps due to their business relationship. Jean Hebert’s book is a short and powerful, presenting a very different strategic approach using replacement of damage to handle the majority of the problems caused by aging, with the brain being the one thing that needs special treatment due to identity preservation. This is a thought-provoking quick read that even brings transhumanistic and philosophical questions into the mix.

All of these books are worth a read. It’s great to see so many of them coming out, especially because of the rapid pace of the research and industry. I’d say it’s important to go into these books with the right mindset. Most of the negative comments are about not being actionable feedback for people that want treatments today. Unlike the ’embracing aging’ books it doesn’t try to make you feel better about getting old, and I think this is jarring to some people as well. But the point of these books is to change the pro-aging stance that society has developed before there was anything that could be done about it. This is a field that will change life as we know it, literally, and it is just taking off now. On a parting note to get in the right mindset, I highly recommend reading Nick Bostrom’s gem The Fable of Dragon-Tyrant.